Interview with Jaidyn Hale (Among The Restless)

STM:  Hi There Jaidyn, thanks for your time today, firstly congratulations on the new EP Define which is out now.  Clearly, Covid had a huge impact on the recording and timing of the release, how did you find the process? Were there many delays and hurdles you had pop up?

Always a pleasure and thank you! Covid has most definitely made it hard over the past few years but nonetheless, we have persevered and all made it through. We were lucky enough to have actually already made the venture to Red Engine recording studios in Brisbane and laid down all the tracks last year before that last bad lockdown hit us. In regards to releasing the EP, I think the biggest thing was we wanted to wait and be able to experience it with our fans, friends, and family in person. Without being able to gig and support what we are so proud of it wouldn’t have made sense to us to release.

STM: As a relatively new band forming not long before covid hit you have done extremely well pushing out singles during times when gigs were vetoed, and the music industry was stopped in its tracks. Your determination as a band certainly shines through and has given you the results looking at your Spotify streams. You must be so proud of the band's achievements.

One hundred percent, not being able to see each other and especially not being able to rehearse wasn’t great and took its toll on us. Considering how much of the early stages of the band were hindered, I think we have really pulled through and shown that nothing can stop us from doing what we love.

STM: You traveled to Brisbane and put yourselves in the safe hands of renowned recording royalty in Steve James (The Sex Pistols, The Jam, The Angels, The Screaming Jets, Airbourne), tell me a bit about working with him and your recording process.

Without Steve, none of this would have been possible. His guidance and expertise in his craft made recording our first EP a breeze so to speak. Basically, we start by jamming through the songs together and getting a feel in the studio. After this, we all track our parts individually, and then it all gets roughly comped to hear a basic rundown of the mix. Throughout this stage is where a lot of change happens in the songs with new ideas thrown in or parts are taken out. It was such an amazing experience, and we are so looking forward to getting back up there as soon as possible!

STM: Define has a wonderful arc listening to it from start to finish, it has a great flow and concludes with the sublime Growing Pains. The addition of strings lifts this song from bloody great to amazing, was that extra layer always part of the plan?

When recording that song initially we knew we wanted it to be big. Lachie had this amazing vision from the start and it was just missing something. The addition of the violin really uplifted the whole song and added such a cool atmosphere, and helped to even more encapsulate the sort of direction we were taking the song.

STM:  Slave Within The Change is like a big slap in the face with its ripping riffs and angsty lyrics, how was the writing process, and who put pen to paper with that one, or was it a joint effort?

Slave Within the Change was an awesome song to record and personally my favourite off the EP. I remember working on it through a couple of rehearsals with Josh and Lachie a few years ago and laying down a rough foundation for what the song became. Lachie and Rhett wrote the lyrics for this one and then it came back to a rehearsal where we refined and made the song what it is now.

STM: The EP launch and regional tour are kicking off in just a matter of days, you and the boys must be pumped to be out on the road and performing live gigs?

It’s amazing. I don’t think we could explain how excited we are if we wanted to! Being back on a stage has been an absolute blessing and it’s going to be so awesome to go to places we haven’t played at yet and bring our music around Victoria.

STM: It’s hard to fit everything on your EP was it difficult to leave some of your original singles off? You have some pretty popular ones to choose from.

I wouldn’t change anything about the EP. I think the way it plays from start to finish really sets in stone the experiences we went through and how we as a band felt over the last few years. For those of you wanting to get your hands on a physical copy of the EP, you may be surprised with a little extra something on the CD!

STM: Rumour has it that you have been behind a drum kit since you were two years old, is there any truth in that?

That is completely true! Some say I was born with drumsticks in my hands.

STM: Fun question to close out, you are stuck on a desert island and have three bands on repeat, who are they?

That’s a hard one, but for me, at the moment Ocean Grove would absolutely take the cake. Two others I would pick would be Warrant and Megadeth, although it’s really not an easy choice!

All the best on the tour and with the new EP Define, I look forward to getting along to a few of your gigs and enjoying live music again.

‘Define’ serves as a consolidation of character through recent rough times, pouring our heart and soul into our music, thus ‘Defining’ ourselves. - Among The Restless 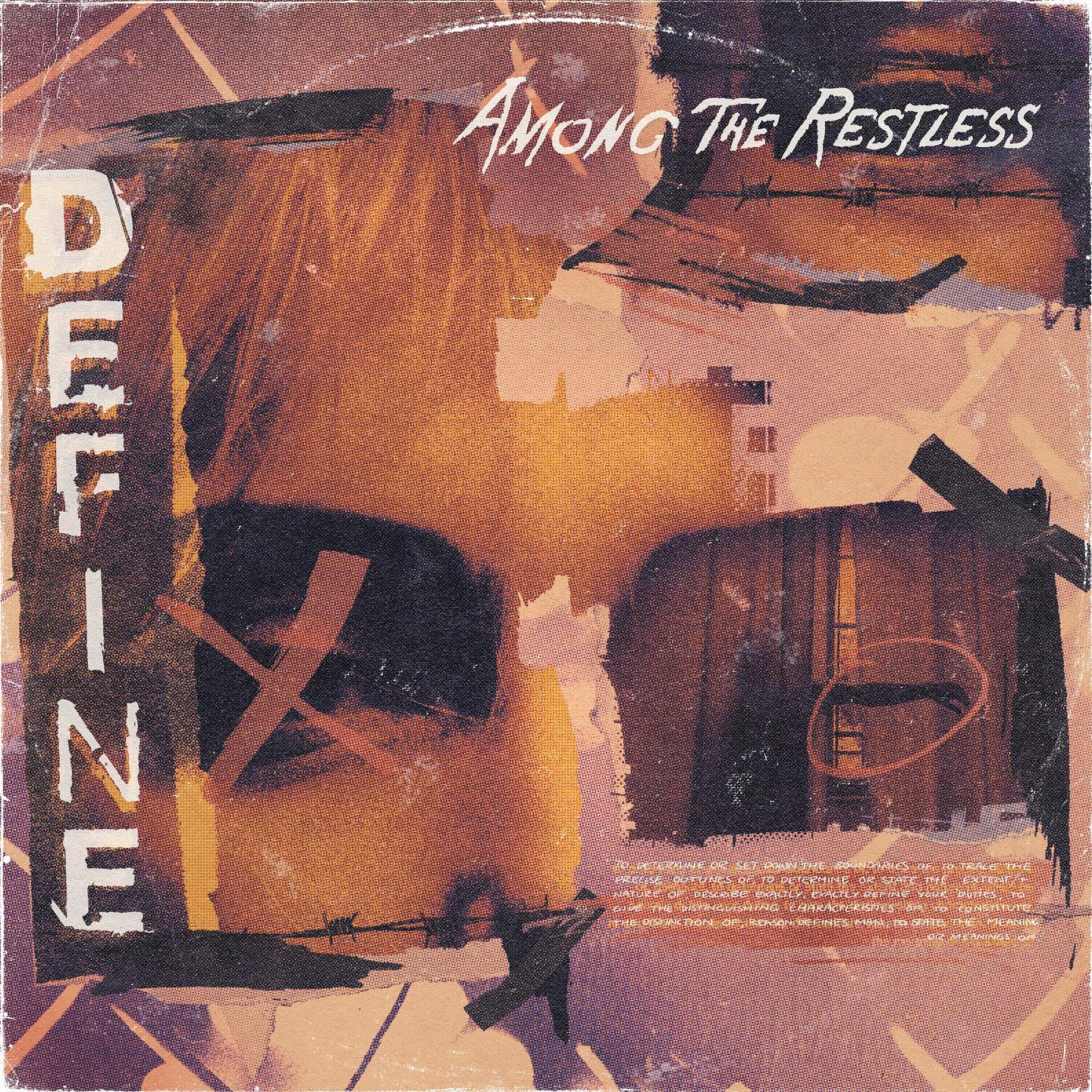 DEFINE is OUT NOW!

Slave Within The Change

DEFINE is OUT NOW!

Come celebrate with AMONG THE RESTLESS over the next few weeks as they take DEFINE on the road! 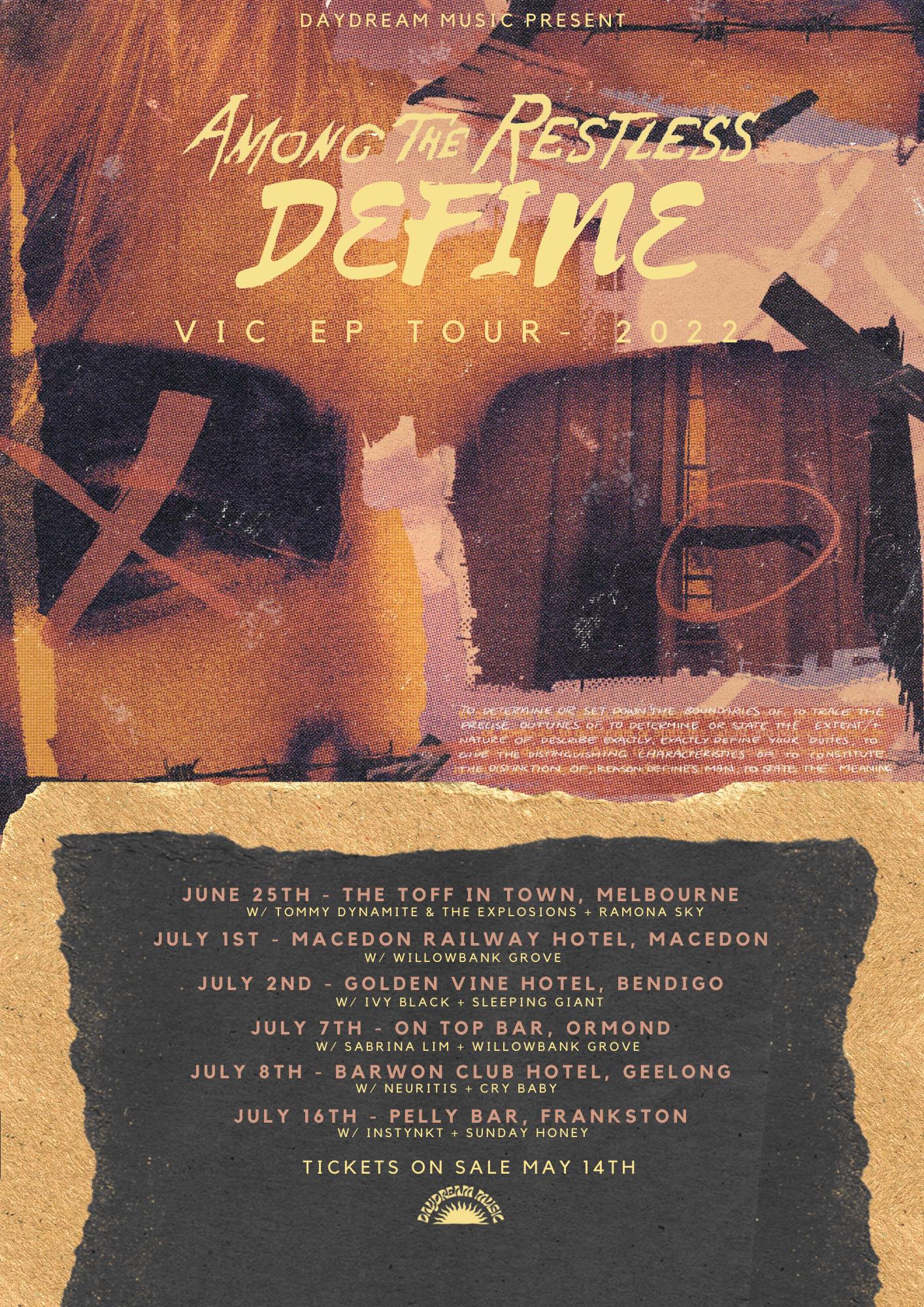